A young woman wakes to find her roommate missing. Suddenly a hand reaches up from the foot of her bed and grabs her leg. It’s her missing roommate, who’s been stricken by a mysterious illness.

Making her way outside, she encounters others suffering from the same symptoms. Arriving at the library, it seems eerily quiet. Upstairs, she finds just one student studying. She texts the friends who she’d come to meet. One-by-one she receives a reply. They can’t make it, they’re all sick.

While the two-minute short mirrors the opening sequence of an apocalyptic Hollywood thriller, it’s actually a promotional video for Rutgers Student Health’s annual flu vaccine clinics. And chances are, if you’ve spent any time on the Rutgers–New Brunswick campus this flu season, you’ve seen it.

“It was constantly playing, and I definitely think it caught everyone’s eye,” say Minsu Kim and Yoonsun Choi, coordinators of Phi Delta Chi’s Flu Vaccine Clinic Committee, the brainchild of the student-produced ad. “Everyone that starred in it gets constant messages from their friends saying things like, ‘Hey, was that you [in the video playing] at Werblin? I saw you again while working out.’”

“We want to create a healthier Rutgers and every person that gets vaccinated not only protects themselves, but their peers.”

Rutgers’ annual flu clinics didn’t always draw much attention, let alone a crowd. The initiative began with a single nurse practitioner that would go to various campus venues, administering a handful of vaccines at a time. Over the years, bigger student health groups began coordinating in an effort to grow the program, but the campaign remained relatively siloed.

Then in 2016, two students were diagnosed with bacterial meningitis. Looking to stop the outbreak in its tracks, student health implemented numerous measures to protect the university community. Looking outward for help in planning several large-scale vaccination clinics, the department began collaborating with student organizations, other campus partners within the Division of Student Affairs, and third-party vendors such as Walgreens. Based on the success of that model, student health restructured some of its smaller programs like the flu clinic, opening the door for Choi, Kim, and Phi Delta Chi (PDC), a professional, co-educational pharmacy fraternity.

One of three professional pharmacy fraternities officially recognized by the university, PDC was founded at Rutgers in 1992 and has been committed to charitable causes since its arrival on the banks. Active in Dance Marathon, the fraternity has also fundraised for St. Jude Children’s Research Hospital, the national organization’s philanthropic partner, and when the opportunity to work with student health presented itself, its members needed little convincing.

“A lot of brothers are involved with other organizations who do patient outreach, but we didn’t have a specific event like that for ourselves,” says Kim. “Now that we have that opportunity, we’ve seen brothers eager to jump on it because it’s ours. It allows us to expand our role as an organization that is in the healthcare field and provides our members with experience and exposure to how these clinics are run.”

Natives of Bergen County, New Jersey, both Choi and Kim have been involved with the student health flu clinics since PDC’s association with the initiative. With Choi serving her second term as a coordinator and Kim getting a glimpse into its operation as one of the fraternity’s volunteers last year, the pair entered the 2018-19 cycle as PDC’s primary student liaisons with student health. 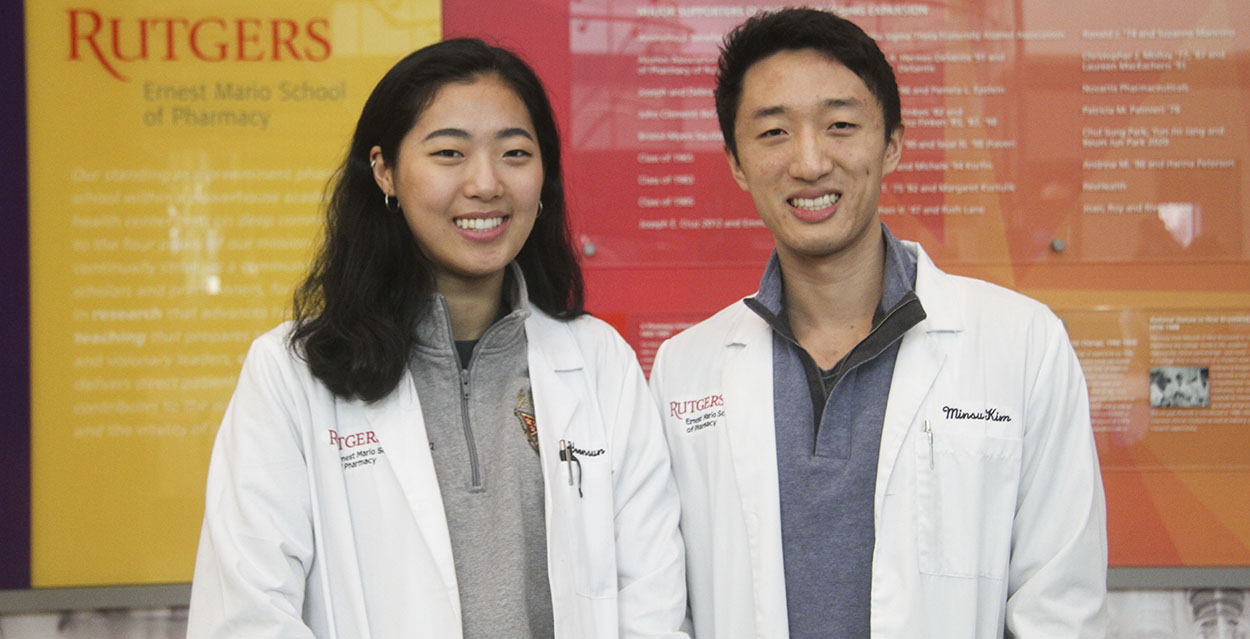 “Minsu and Yoonsun were present at all our meetings,” says Gaetana Holt, a registered nurse within the department charged with organizing the yearly clinics. “They gave us their input regarding the location, timing, messaging, and their knowledge of the student experience has really helped us to grow.”

One of their first suggestions was to streamline the clinics themselves. In years past the sheer number of locations spread staff too thin. Instead, they advocated for just two locations on the clinics’ three proposed days. By better leveraging high traffic areas within student centers as well as centralized locations such as the Yard on College Avenue, they could help alleviate some of the pressure on volunteers, while still ensuring the clinics were accessible to a large segment of the university community.

The duo also recommended altering the flow of the clinics to cut down on wait times and more efficiently process and vaccinate students. But most importantly, Choi, Kim, and the PDC committee worked in conjunction with student health’s own marketing arm to make sure information about the clinics was almost unavoidable.

There were table tents in the dining halls and ads in the residence halls, student centers, and yes, the gym. They reached out to larger umbrella organizations like the Rutgers University Student Assembly (RUSA) to help amplify their message. Posters were placed in local business and eateries on Easton Avenue and a social media calendar was created to ensure students were receiving constant, coordinated reminders. There was even the promise of free t-shirts to those who got vaccinated early. And finally, there was the now-famous video, simply shot with an iPhone over the summer, starring the PDC committee members themselves.

“I don’t feel like a lot of students get this kind of opportunity and it’s not something we can learn in a classroom,” says Kim. “There’s a lot of pharmacy students who are involved in pharmacy organizations which only impact the pharmacy student community. To work on something of this scale that involved the whole school was an eye-opening experience.”

“All these Rutgers student health officials, vice chancellors, and directors really listened to us and respected our opinions,” adds Choi. “They empowered us by putting us in charge of connecting with the student population and it was really rewarding.”

The numbers spoke for themselves. During the two clinics last semester on October 10, student health vaccinated 951 students – eclipsing the total of all five of the previous year’s clinics combined (838). The following month on November 13, another 763 students received vaccinations, bringing the total thus far to 1,714.

To deal with the increase of students, Choi and Kim recruited fellow members of PDC to work rotating shifts. Helping to greet, check-in, and assist other students in filling out insurance forms and other paperwork, fraternity members also monitored the line flow, helped student health collect data as part of an initiative with the New Jersey Department of Health, and educated students about the flu vaccine in hopes of dispelling common myths.

Alongside Choi, Kim, and PDC, student health will host two final clinics on Tuesday, January 29. Taking place from 1-9 p.m., vaccination locations will be held at the Livingston Student Center and the Sojourner Truth Apartments (The Yard).

“Accessibility and convenience are important for students, because it’s not always easy to go home to your local pharmacy to get the flu shot,” says Choi. “You could be next, possibly be bedridden for a week, and that can really influence your college experience and your grades. We want to create a healthier Rutgers and every person that gets vaccinated not only protects themselves, but their peers.”

To learn more about Phi Delta Chi, one of 13 fraternities recognized on the university’s Professional Fraternity Council, visit: www.rutgerspdc.org.