Senior Steven Hayes recently sat down to talk about student involvement, leadership, and the MARK Conference. 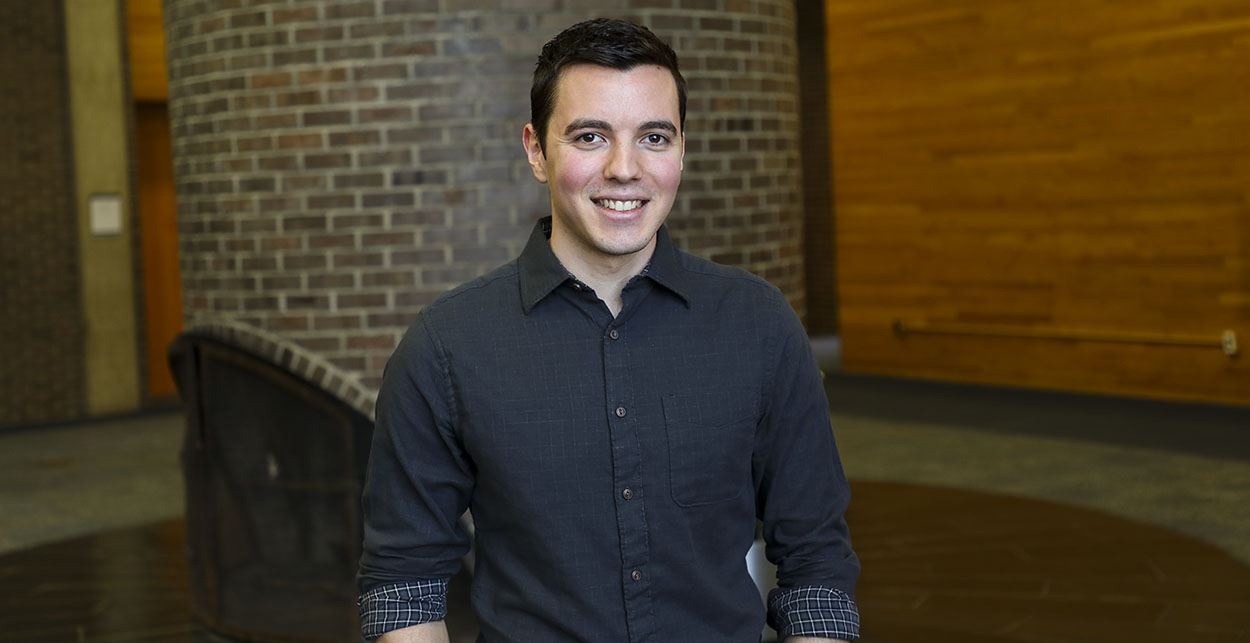 The Department of Leadership and Experiential Learning will host the 2019 MARK Conference on Saturday, March 2. One the department’s signature events, the annual conference is a full-day, TED–styled experience that features over 20 diverse speakers that have made their mark on society and who encourage and inspire attendees to do the same.

A senior from Lawrenceville, New Jersey, Steven Hayes currently serves as a captain on the conference’s planning team. Studying political science and philosophy, Hayes recently sat down with Rutgers Student Affairs to talk about his experiences with MARK, the department of leadership and experiential learning, and the importance of getting involved on campus.

What are some of the organizations you’ve been involved with on campus?
In my first two years I tried a lot of different organizations. I was involved in model UN, Rutgers Debate Union, and the university choir. But, the first experience that I had with Rutgers extracurriculars was actually with the department of leadership.
The summer before my first year, I received an email about Camp UKnight and the Discovery Program. I told myself that I was going to get involved in college and figured if I’m going to start, I might as well start now, so I signed up for both. I learned a lot about the students at Rutgers, the diversity that existed, and how much I had to learn from other people. I enjoyed the programs themselves and the way that they fostered relationships and interactions that allowed you to grow from your peers.

How has your involvement with the leadership department evolved?
I started in the First-Year Fellowship, which is the first tier of our Lead-Up Academy. My second year, I continued through to the second and third tiers, which are Seeking Success, which focuses on professional development, and the Peer Leadership Mentor program, where you get to mentor first-year students in the fellowship. Also in my second year, I was a leader on the Discovery Program, which I participated in my first year. Then my third year I got to be a leadership intern in the department and I helped to run the peer leadership mentor program, so there’s this really neat progression where each year you get to help put on the experience that you’ve benefited from in the past.

What was your first experience with the MARK Conference like?
During the second semester of my first year, I went with a friend of mine who was also in the first year of fellowship. We had no clue what to expect going in, but we were honestly completely blown away by the conference and left feeling very inspired. We got to hear one talk by Kacy Catanzaro, who was the first woman to win American Ninja Warrior. A week later we sought out an American Ninja Warrior gym and we went there and tried everything that she had been talking about just because we were so motivated by what we heard. Everyone there is passionate about the purpose of the conference, which is to inspire people to go out and make a mark on the world. It’s that energy that’s stuck with me and made me continue to be involved in the MARK conference over the next three years.

What different roles have you held during your time participating in MARK?
After attending the conference my first year, I joined the SWAT volunteer team, which is made up of 40 to 45 students. We worked on everything from creating structures for the conference to building energizers, which are activities that we do throughout the day. After doing SWAT again my junior year, I’m now one of nine students who are serving as captains for this year’s conference. As captains, we help with the formation of all the ideas that go into MARK, from picking speakers to coming up with the theme, and sort of getting a sense for what the world is like right now and what messages will really hit home.

What has your experience been like as a MARK captain?
One of the reasons that I’ve continued with the [leadership] department is because I had a lot of role models to look up to when I was a first, second, and third year student. Those role models really helped me to grow and so I hope that I’m a role model for underclassmen. I think that one of the special things about the department as a whole is that you get the opportunity to lead certain things, while just being a participant on others. But in all of our positions, every person who’s involved is leading in a way. Whether that’s by example or through direction, we’re all leading, and we’re all growing from each other.

What are your biggest takeaways from being involved with MARK?
The first is that everybody has a story to tell. I’m fortunate enough this year to get to work with our student ignite speakers. You wouldn’t necessarily know if you’ve just met this person on the street, that they had that story. But now when I go out and walk down College Avenue and see all these students, I think about how each one of these people could very well have a story just like the one I heard up on the stage of the MARK conference – and that’s really inspiring.

The second takeaway is that everyone is capable of making their own unique mark on the world. We get to hear from students who have used their talents to make a difference and also get to hear from people who have spent their whole lives fighting for something and are working to develop themselves and realize their potential.

Why should students attend the MARK Conference?
The reason you should go to MARK is that when you’re listening to the speakers, there will be somebody who you’ll feel like is talking directly to you. We get such a wide variety of speakers that no matter what your background is, no matter what your interests are, somebody on that stage is going to tell you what you need to hear that day. The fact that we can do that for a massive group of students and get every single one of them inspired to go out and make a change, there’s nothing quite like that.

What has your involvement with the leadership department taught you?
Everybody is a leader. Everybody influences other people and you learn best through doing things and through experiences. The department helps people understand who they are and how they influence people. They put people in positions where they get to practice that and they learn about themselves, others, and how to best accomplish whatever their goals are.

How have you benefited from your involvement on campus?
I was very reserved in high school and I made a conscious decision my senior year that I really wanted to push my comfort zone and try new things. That’s one of the reasons that I came to Rutgers and it’s what prompted me to get involved in the [leadership] department. While I wouldn’t say that being involved in extracurriculars has changed who I am or made me a different person, I will say that it’s made me a much better version of myself and the version closer to the one I feel like I was meant to be.

I think whatever you do, if you put your whole self into it, you will benefit from it. Finding something to be involved in outside academics is going to help you. There are so many opportunities to be involved and to grow in all of the ways that are going to make you feel like you have a fulfilled life, all while you’re still getting a great education.

For more information about the MARK Conference, please visit: markconference.rutgers.edu.

For more information about the Department of Leadership and Experiential Learning, please visit: leadership.rutgers.edu