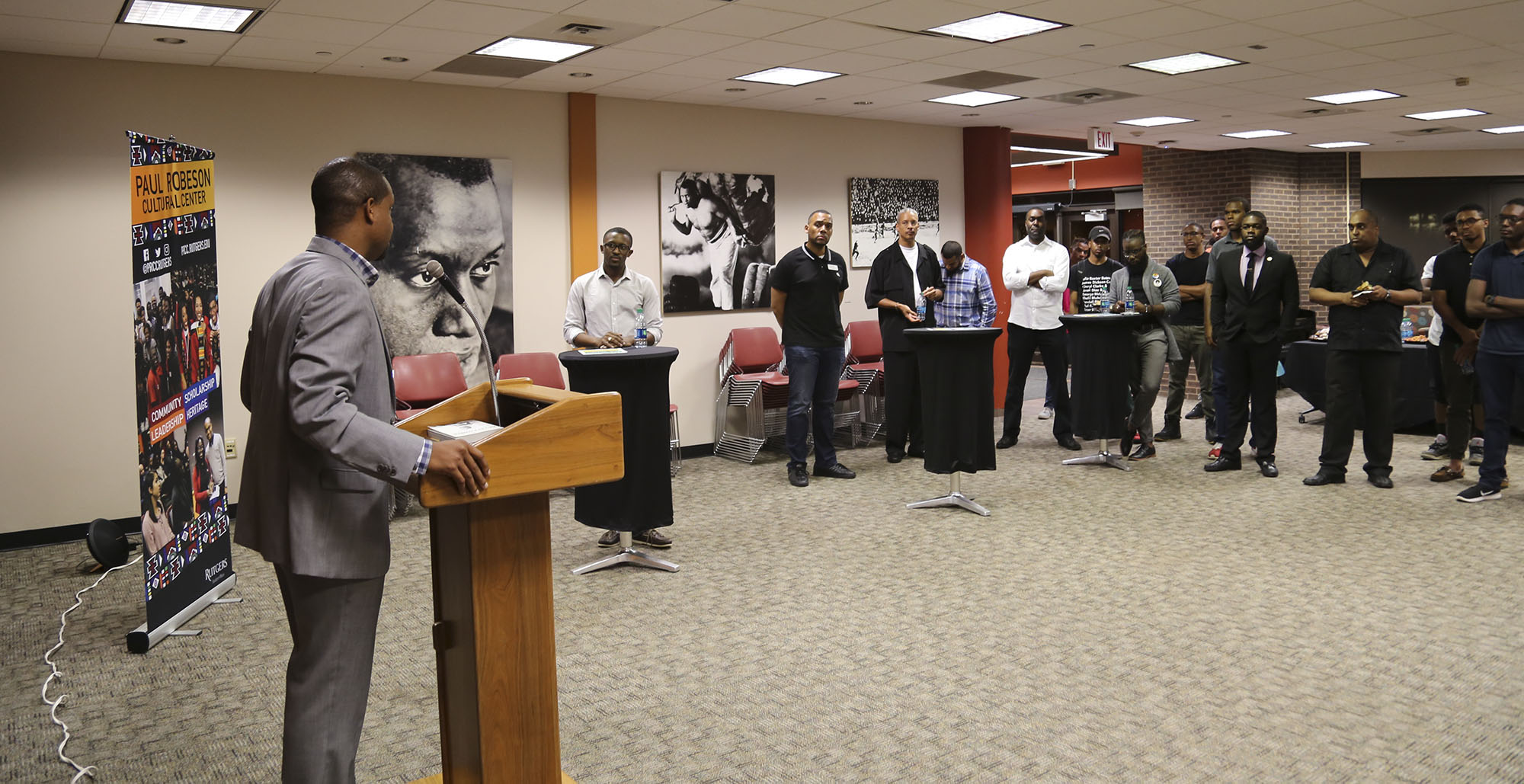 A graduate student at Rutgers University-New Brunswick, Tyreek Houston attended a panel at the Paul Robeson Cultural Center in the fall of 2016. Yet to encounter a faculty member in his chosen field, he was immediately drawn to Charles Senteio, an assistant professor at the School of Communication and Information. After the event, Houston wasted no time in approaching Senteio in the hopes of forming a connection. Two years later, the pair have developed a profound mentor-mentee relationship.

Since its establishment at Rutgers University—New Brunswick, the Paul Robeson Cultural Center (PRCC) has been dedicated to supporting black students by providing a variety of educational, cultural, and social programs. Created by PRCC director David Jones, the Black Men’s Excellence Mentoring Institute is an informal way for students to connect with black male role models within the community.

“I realized how important it is for me to be visible as an African-American male professor,” says Senteio. “The black men’s mentoring program is right in line with what I view as my responsibility to follow through with that.”

“I think it’s important to have a visual representation of people who look like you in spaces that you want to be in.”

Having had previous experience as both a mentor and a mentee, Senteio’s approach to mentorship is focused on helping students achieve long-term goals. Feeling he can be most helpful to those who are looking to balance their full-time careers while pursuing an advanced degree, Senteio often centers conversations with students like Houston on discussions around courses, skills, jobs, and grad school.

Due to their shared interest in online educational technology, Houston views his connection with Senteio as one of the most profound professional relationships he’s built at Rutgers. Remaining in consistent contact through email, phone calls, text messaging, and in-person meetings, Senteio’s mentorship has helped Houston understand the various possibilities of a doctorate program, which he now feels confident in pursuing.

“I think it’s important to have a visual representation of people who look like you in spaces that you want to be in, or who are in the same type of work,” says Houston. “It was definitely a sense of comfort, and it inspired me to seek wisdom from him. By learning from what he’s been through, I had the knowledge to navigate and understand spaces I wasn’t previously familiar with.”

Although Houston was not highly involved with the PRCC in his undergraduate years, his positive experience with Senteio in the black men’s mentorship program has inspired him to one day become a mentor himself.

“I would definitely recommend going [and becoming involved] to the center,” says Houston. “You’re around people who look like you, so that sense of feeling like an outsider is instantly eliminated. As Dr. Jones always says, it’s a home away from home. If you’re looking for any type of support, like the black men’s mentorship program, that’s where you’ll find it.”