With a passion for service, senior Jennifer Schneider found a home within the sisterhood of Omega Phi Alpha. 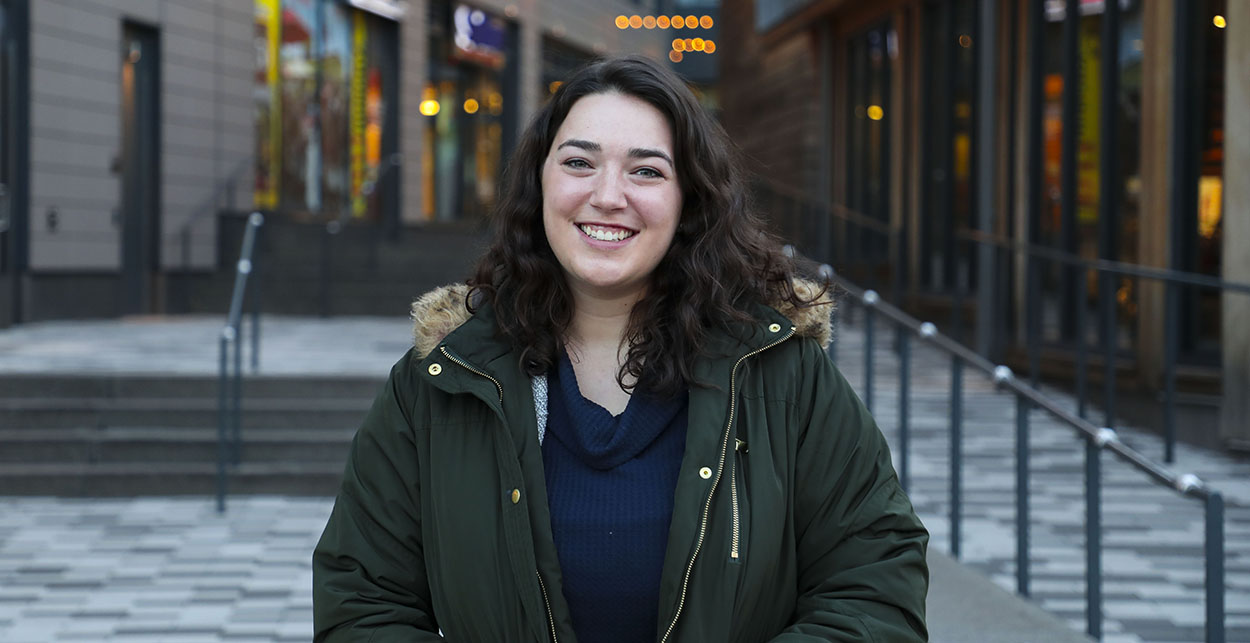 Earlier this spring, senior Jennifer Schneider addressed a class of first-year students as part of her role as a FIGS peer instructor (First-Year Group Seminar). Recalling her time spent in their shoes, the senior from Bergen County, New Jersey described her first experience with the university’s annual Involvement Fair and the seemingly endless rows of tables and student organizations lining College Avenue.

“Everyone says it, get involved – it’s like a mantra,” says Schneider. “But, which clubs do I choose? Which organizations do I invest my time in?”

While it can often be overwhelming for new students trying to find their niche at a university as large at Rutgers University–New Brunswick, Schneider left the group with a piece of advice.

“Figure out what you’re passionate about,” says Schneider. “Because then you’ll find people who share that passion.”

Growing up as a multi-sport athlete, Schneider joined the university’s club softball team during her first year. While she quickly found a home on the diamond, Schneider’s Rutgers journey took a detour when she tore her anterior cruciate ligament (ACL) while playing in a pickup basketball game during the summer of her sophomore year.

“I was really looking for a place to make my mark and feel like I belonged,” says Schneider. “I felt like I belonged on the softball team, but I couldn’t play that year because I was injured.”

Opting to undergo surgery prior to the start of the semester, Schneider returned to the banks two weeks into classes. Spending an increasing amount of her free time in her residence hall room due to the injury, Schneider began to feel a little lost.

“The more service we’ve done as an organization, the more we want to do because we’re inspired and uplifted by the community leaders we work with.”

Then in the spring of 2017, Schneider came across an Instagram post for Omega Phi Alpha, a service sorority affiliated with Rutgers’ Panhellenic Association. While Schneider hadn’t considered participating in Greek life, she attended an information session to learn more. Later returning for a service night, she helped put together care packages for military members stationed overseas.

“I never saw myself being in a sorority” says Schneider. “But everyone I talked to was so incredibly genuine and welcoming. I really felt at home from the beginning.”

Finding a new community to explore, Schneider spent the next several months in the organization’s new member process. In addition to learning about the sorority’s history, Schneider helped plan a cleanup of the Rutgers University Ecological Preserve, while also participating in Omega Phi Alpha’s permanent service project, Buddy Ball of Edison.

A nonprofit organization founded in 1994, Buddy Ball gives children with special needs and developmental disabilities the opportunity to play sports in a safe and supportive environment. Offering activities year-round, the program relies on volunteer buddies to provide assistance, encouragement, and guidance to players.

Stepping onto a basketball court for the first time since her injury, Schneider wore a knee brace until she noticed a frightened child, who thought it was hurting her. Cautiously taking off her brace, Schneider continued on, helping her buddy through drills and playing alongside the children during a game.

“I was really nervous – and walked instead of ran,” says Schneider. “Sports were really formative for me. It gave me confidence, helped me develop both motor and social skills, and taught me a lot about teamwork and work ethic. Buddy Ball is near and dear to my heart because these kids deserve to enjoy the benefits of organized sports like I did.”

Transitioning into active membership in Omega Phi Alpha later that spring, Schneider became more involved. As a junior, she served as the one of the sorority’s two liaisons with RU4Kids, a joint program between Rutgers University Dance Marathon (RUDM) and the Embrace Kids Foundation that connects student organizations with patient families. Now in her final year, Schneider has moved into an executive board role as the organization’s external service director.

With food insecurity one of the sorority’s focuses this past fall, Schneider helped to organize service hours at several local food pantries. To combat housing insecurity, members volunteered at New Brunswick’s warming centers during “code blue” nights in which the temperature fell below 25 degrees Fahrenheit.

Schneider and others also logged service hours for the Center for Great Expectations, an organization that provides mental health and substance abuse treatment to individuals and families impacted by trauma, abuse, and neglect, as well as Girls on the Run, a nonprofit committed inspiring girls to be joyful, healthy, and confident.

Coupled with members logging hours at various other programs such as local thrift shop run by the Second Reformed Church, environmental clean-ups at Rutgers Gardens, and of course, Buddy Ball, Omega Phi Alpha recorded over 1,000-service hours last semester while participating in over 20 projects.

“The more service we’ve done as an organization, the more we want to do because we’re inspired and uplifted by the community leaders we work with,” says Schneider. “Everyone in our sisterhood is passionate about helping others and the communities surrounding Rutgers.”

That passion has pushed Schneider, a double major in political science and history with plans to join Americorps following graduation, to become increasingly involved and interested in public service.

“I’ve had such a positive experience being a service director for Omega Phi Alpha,” says Schneider. “I know I want to continue helping people – whether that’s in policy, education, or law.”